Home
For individuals For nonprofits For lawyers About us
Log in
RESOURCES  |  June 9, 2020

10 tips on how to talk to donors about planned giving 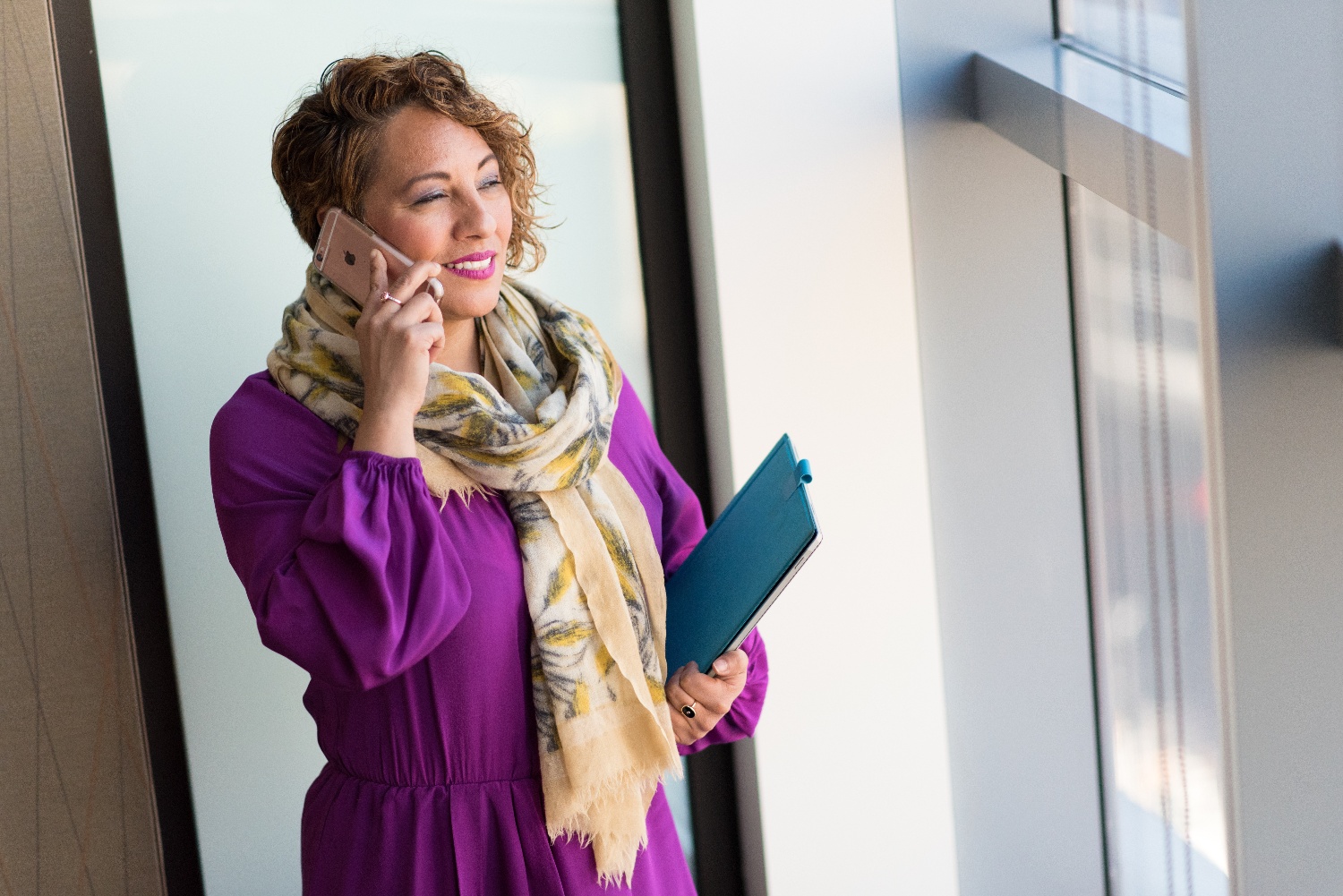 Anyone who makes a will can make a planned gift to a nonprofit. Gifts in a will or trust, or bequests, don’t affect your supporters’ everyday cash flow. This makes planned gifts a simple and painless way for donors to show their support. For this reason, nonprofits should talk to all their donors about planned giving.

Donors who are asked to include a gift to an organization in their will or trust are 17 times more likely to make a bequest than those who aren’t asked at all.

By simply making the ask, your organization could receive more donations and secure its future. Just make sure that you simplify the giving process as much as possible. Direct your supporters to resources on how to create a will and make it easy for them to notify you of their gift.

When you do this outreach for your planned giving program, your communications should be thoughtful and informative. Here are ten tips to help you talk to donors about planned giving today.

Generally, organizations only receive planned gifts upon the donor’s death. But that doesn’t mean you should lead your communications with it. In a recent white paper from planned giving experts, Russell James and Michael Rosen, they write: “Legacy fundraising communications that “lead with death” need to be shelved...communications should be about delivering value to the donor. Through your outreach, you should strive to enhance each individual donor’s sense of wellbeing.”

Reminders about death actually cause two reactions in people: avoidance or the pursuit of a lasting impact. When you’re talking to donors about planned giving, you want to avoid the avoidance behavior and instead activate the desire for people to create an impact. The best way to do this is to focus your communications on how your donors can create a legacy.

When a donor makes a planned gift to an organization, they ensure their own legacy by supporting the future of causes they care about. Use this idea to lead your communications on planned giving.

In a similar vein, avoid language like “leave a legacy” because it implies death. Instead, use language use “create a legacy” or “make a gift.”

2. Provide resources to create a will.

Another way to open up conversations about planned giving is to provide your supporters with resources that make it easy to create a will. Let them know that creating a will is the best way to protect the people and causes they love. Having a will ensures that your donors’ wishes are known, and saves their loved ones the stress and cost of intestate probate proceedings.

These resources could include links to free tools for creating a will online, such as a freewill.com. Or you could provide estate planning templates with language on how to include your organization as a beneficiary.

3. Mention the benefits of planned giving.

Planned gifts are mostly rooted in values. Bequests are a way for donors to make a large, meaningful gift — one that they might not be able to make otherwise. If they care about your organization and cause, this is an incredible way for them to have a lasting impact. 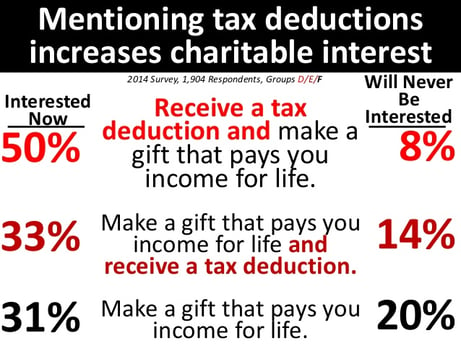 However, some planned gifts can come with some bigger tax advantages as well. If you’re talking to donors about charitable remainder trusts or gift annuities, mention the tax deductions.

4. Frame bequests as a tribute to a family member.

Many planned giving donors like to make bequests in honor of a loved one. In the same way that people desire to create their own legacy, donors may want to see their family or friends live on through the causes they loved.

When talking to donors about planned giving, try framing bequest gifts as a way to honor friends or family. In the work above, 23% of people showed interest in planned giving when asks led with phrases like “Honor a friend or family member by making a memorial gift.” But only 13% showed charitable interest when requests led with "make a bequest gift".

Let your donors know how their gifts will support the future of your organization. Use phrases like “support our mission for generations” or “make an impact for decades to come.” By emphasizing the long-term significance, your organization will assure supporters that their planned gifts will create a lasting legacy for them.

One of the most powerful things you can do when talking to donors about planned giving is to include stories from other legacy donors. These stories can feature why those donors chose to give and the impact they hope to have. 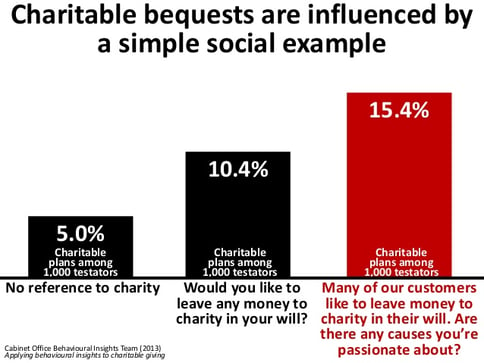 But even social proof as simple as “Many of our supporters have included our organization in their will” can have a tremendous impact on both willingness to give and the size of gifts.

When prompted with this type of phrase, more than 15% of people will decide to include an organization in their will. This is up from 10% of people who make a bequest after they're asked without social proof. With social proof, gifts double in size as well.

7. Include planned gifts as one of several ways to give.

Offering three ways for supporters to give can make a big impact on planned giving efforts. Many of our nonprofit partners see success when they use phrases like “There are several ways you can help.” They can then provide three options, including making a gift in a will. Adding bequests as one of several options can help your organization introduce planned giving to many supporters at once without alienating anyone who might prefer to give in another way. This is also a great way to keep planned giving top of mind for potential legacy donors.

If introducing supporters to planned giving for the first time, avoid technical language. This includes terms, such as “bequests”, “charitable remainder trusts,” or “charitable gift annuities.” Formal terms like these actually lower charitable interest. In the study for Russell James’ “Planned Giving Myths” mentioned above, 23% of people showed charitable interest when approached with the sentence “Make a gift to charity in my will.” Only 12% showed interest when prompted with the phrasing “Make a bequest gift to charity.”

When you talk to donors about planned giving, the best practice is to use language that’s easy to understand. Skip the planned giving jargon that your nonprofit throws around internally. Instead, phrase communications around how to make planned gifts. For example, you can say “make a gift in a will,” or "make a gift that pays you income for life.” Using language that’s too technical may confuse and alienate potential donors.

With everything going on in the world from pandemics to protests, it’s more important than ever to communicate with donors in a genuine, authentic way. When reaching out to supporters to talk about planned giving, tell them how you’re doing. Give them a peek behind the scenes of your organization or your life.

Along with this, make sure that your donors or supporters know you care about them. Provide them with ways to reach out — even if it’s just to talk about how they’re doing.

10. Don’t ask for a gift in the first one-on-one conversation.

Along with the tip above, use the first conversation you have with a potential planned giving donor to get to know them better. Ask them open-ended questions about them, their families, or why they support your organization.

Before setting up the first meeting, you can even tell them that you don’t intend on asking for a gift. Let them know that you just want to learn more about them or thank them for their previous contributions.

At the end of the initial call or meeting, try to schedule another meeting with a specific purpose in mind. This could be to chat through planned giving options or even give your donor a tour of your organization’s facility.

Planned giving programs are how organizations make an investment in their future. Large or small, here’s how your nonprofit can start a program.