Home
For individuals For nonprofits For lawyers About us
Log in
RESOURCES  |  May 19, 2020

The benefits of planned giving for nonprofits and donors 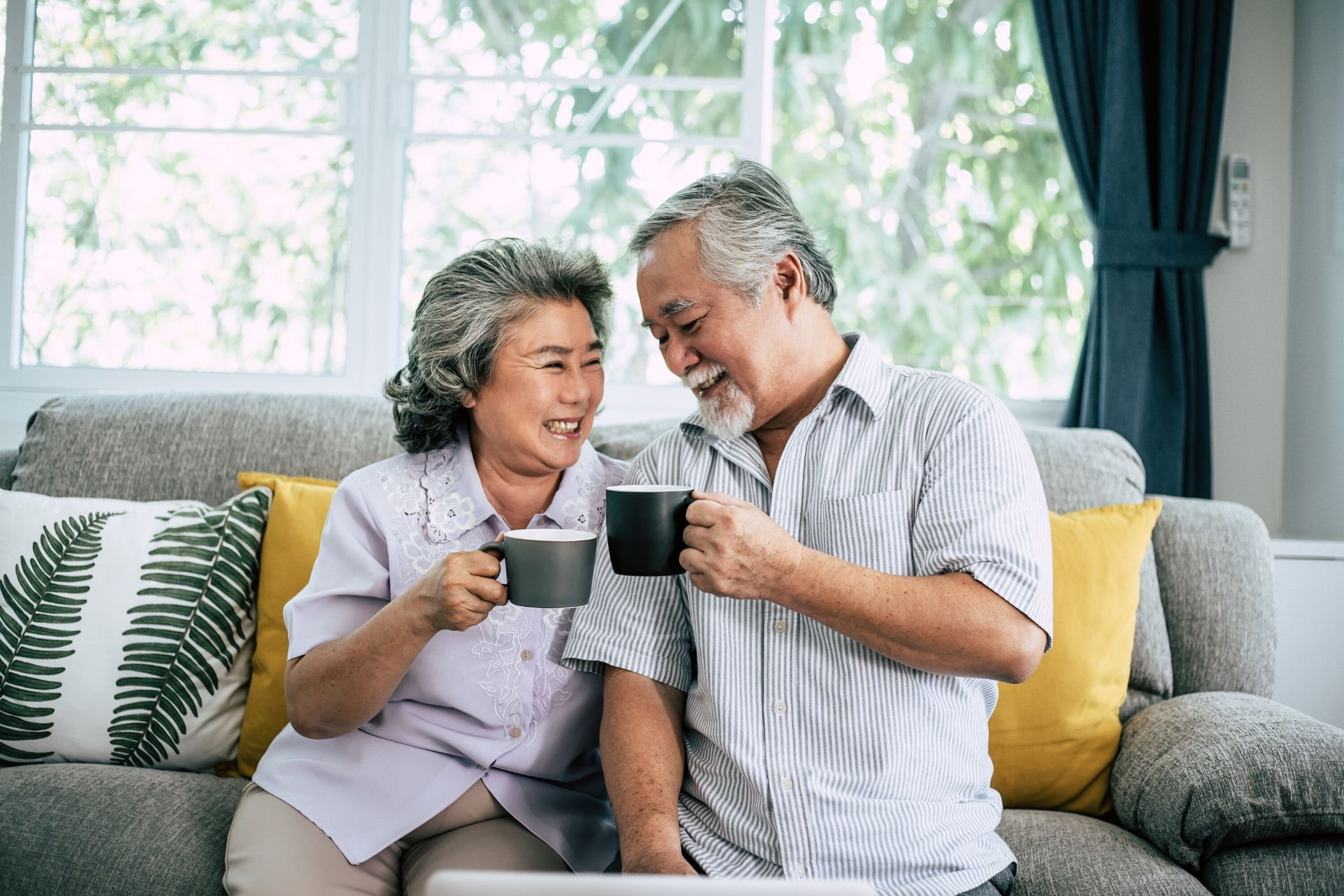 There are a number of benefits of planned giving for both nonprofits and donors alike. By making a planned gift, donors secure their own legacy while nonprofits secure a sustainably funded future for their organization.

5 benefits of planned giving for nonprofits

Nonprofit organizations with strong legacy giving programs are the ones that will thrive even in times of trouble. If you’re trying to convince your board or boss to make new investments, then you’ll need to know the benefits of planned giving and how a robust program will support your organization’s mission for years to come.

One of the major benefits of planned gifts is that they promise future funding for an organization. There are many ways to give a planned gift, but they’re generally left as a bequest in a will. They’re also occasionally given as large sums of money that a nonprofit can either invest or get an ‘income’ from over a long period of time.

Nonprofits need to steward their relationships with planned giving donors to remain in their wills over time. However, they can still use these expected funds to plan ahead and budget for the future, including for economic crises.

According to research from Blackbaud, some organizations receive more than 25% of their annual revenue from planned gifts. Blackbaud also showed that planned gifts actually increase nearly 5% every year — even during recessions when other sources of revenue decline. The more planned gifts an organization can secure, the better off it will be when there is a decrease in other giving channels.

Plus, when the United States increased the requirements for the standard tax deduction in 2017, it caused the first year-over-year decrease in charitable giving from individuals for the first time in over five years. By investing in legacy programs now, nonprofits will benefit from planned gifts and be better able to recoup this kind of loss in the future.

2. Planned giving offers the highest ROI of all fundraising types.

Another benefit of planned giving is that these gifts are often large but cost relatively little to secure. Because of this, planned giving offers the highest return on investment of all fundraising types.

For every dollar spent on fundraising bequest gifts, organizations can expect an average return of $56.83. In comparison, major giving gets a return of $33.33 per dollar, and regular giving sees $8.41 per dollar.

Not only do planned gifts have a high ROI, but they’re often larger than other types of gifts. The average bequest left to a charitable organization on FreeWill is $50,424. The most common value of a planned gift is $5,000, well above the average online cash donation of $128.

Some nonprofit professionals worry that planned gifts will cannibalize annual giving to their organizations. However, planned giving has actually been found to trigger a 75% increase in annual gifts.

In 2014, Dr. Russell James, a Texas Tech professor and planned giving expert, conducted an in-depth analysis of charitable giving. He found that donors who add a charity to their wills increase annual gifts by more than $3,000 in the following years.

Plus, the Center on Philanthropy at Indiana University has found that even among those that didn’t increase their gifts, 47% of donors maintained their annual giving rates — in no way cutting into annual giving revenue. 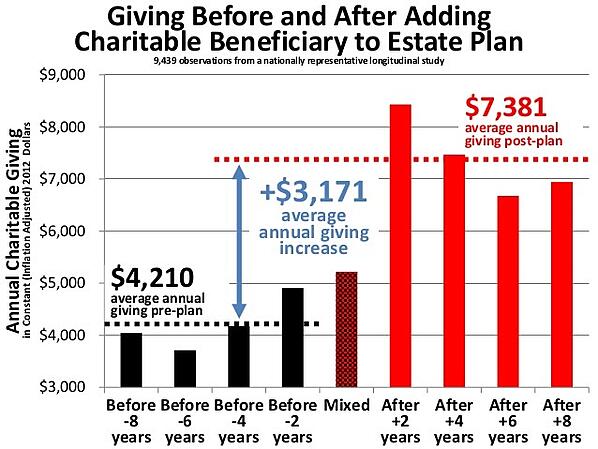 This means that planned giving offers an incredible opportunity to not only sustain your organization’s future but also to bring powerful gifts in the door immediately. Of course, the key is effective donor stewardship. You have to build and maintain relationships with these donors to drive increases in annual giving. Research has found that if you do, these donors will likely give again and again, and in much larger amounts, spurring fundraising growth in your annual giving department.

4. Bequest gifts are accessible to everyone, which inverts the traditional donor pyramid.

When a nonprofit’s supporter puts a charitable bequest in their will, that doesn’t affect their everyday cash flow. Because of this, planned giving is accessible to anyone who makes a will, regardless of their current income. By investing in planned giving, nonprofits can capitalize on loyalty from any supporter who cares deeply about their organization.

This fact, combined with planned giving’s ability to increase annual giving, means that a key benefit of planned giving is that it can effectively invert the traditional structure of the donor pyramid.

Planned gift donors usually sit at the top of the pyramid, only making bequests after becoming annual or major donors. And planned giving officers are often a part of the major gifts teams at their organizations. As such, they adopt these teams’ tools for soliciting donations. They identify top prospects with a high net worth, meet with them, and gradually secure bequest commitments.

Traditional structure of the donor pyramid

However, smaller donors and lifelong savers are often in the best position to make a significant bequest. By stewarding these donors, nonprofits can benefit from a pool of planned giving revenue that would otherwise go untapped.

In our 2020 Planned Giving Report, we found that more than 12% of will-makers — twice the national average — will leave a gift to charity when prompted during the estate planning process. And this is true even when their estates are worth less than $200,000. If you can open up your pool of prospects, simplify the will-making process for your supporters, and prompt them to give, you’ll open up your organization to more fundraising dollars from more donors.

As mentioned above, many people don’t have the means to make annual or major contributions to charity during their lives. But that doesn’t mean they wouldn’t do so if given the opportunity.

The occasional donors, volunteers, and other supporters who sit at the bottom of the donor pyramid still care deeply about the organization. That’s why nonprofits should provide as many giving options to supporters as possible. These include options that don’t affect immediate income.

And the same holds true for wealthier supporters—a robust planned giving program makes it easier to secure non-cash gifts. Once a donor has made a gift in their will (usually a percentage of their estate), they’ll be primed to think beyond cash gifts.

This can be a launching pad for conversations about other ways your supporters can get involved with your mission. For instance, asking for a gift from a donor’s IRA account reduces their sense of financial loss because it feels much more manageable than donating a large portion of their income.

3 benefits of planned giving for donors

In conversations with donors, how can you best answer the question, “Why make a bequest?” From becoming part of an organization’s legacy society to tax breaks, donors benefit from planned gifts in several ways. If nonprofits clearly explain these benefits, planned giving can be an incredibly powerful way to raise funds and drive their missions forward.

1. Donors can create a legacy for themselves or their families.

Through planned gifts, donors can leave a legacy behind after they pass. That’s why planned giving programs are often called legacy programs or legacy societies. Whether leaving a bequest as a tribute to a family member or creating a legacy for themselves, donors benefit from planned gifts because they can make a lasting impact on a cause that’s important to them.

While major donors can create a big impact during their lifetimes and occasionally be recognized with naming opportunities, charitable bequests are one of the few ways that any donor can see similar recognition. To honor these gifts, nonprofits often offer perks like public acknowledgments or special events. Some universities will even create named scholarships in the donor’s memory.

By inviting planned giving donors to join a legacy society, nonprofits will strengthen connections to their organization’s cause. And this stewardship can be extremely important for ensuring the future of that planned gift. Over time, many bequest donors change their charitable plans as they update their wills. With active legacy societies, nonprofits maintain thriving donor relationships and encourage donors to keep them in their wills.

2. Donors can secure the tax benefits of planned giving for themselves and their heirs.

Planned gifts offer a few tax benefits depending on the type of gift. Bequests are particularly tax-advantageous for donors with large estates. Estates worth more than $11.7 million will owe federal taxes, but bequests of cash or other assets (like real estate, autos, or stocks) are deducted against the estate's value. This reduces federal estate taxes for a donor’s heirs.

Other planned gift types see significant tax benefits, as well. For example, charitable remainder trusts are tax-exempt. And when a donor makes a gift of real estate, they receive an income tax deduction equal to the value of the property and avoid capital gains taxes.

Some organizations also consider Qualified Charitable Distributions, or QCDs, as planned gifts. Donors over 70 1/2 years old can use QCDs to make tax-free gifts from their IRAs while still meeting their Required Minimum Distribution.

Note: RMD regulations can change frequently, so stay aware of recent IRS changes to discuss these gifts with donors and prospects effectively.

3. Planned giving donors can determine how their gifts are spent.

One of the key benefits of planned gifts is that donors have more control over where their money goes than with most annual gifts. Planned gifts are generally part of a legal contract like a donor’s will. This means the donor can include language that allocates how or where they want their charitable contribution to be spent (within certain limitations depending on the organization receiving it).

This is also a great reason for nonprofits to continue stewarding their planned giving donors. When donors update their wills, gift officers can keep them updated on where their donations will make the most impact and leave a powerful legacy.

Now that you know the benefits of planned gifts for both nonprofits and donors, you’ll be able to make a case for investing in planned giving at your organization. To learn more, we recommend these additional resources from the experts at FreeWill:

8 types of planned gifts your nonprofit should know

From simple gifts like bequests to charitable lead trusts, there are many different types of planned gifts that nonprofit professionals should know.