Home
For individuals For nonprofits For lawyers About us
Log in
RESOURCES  |  May 26, 2020 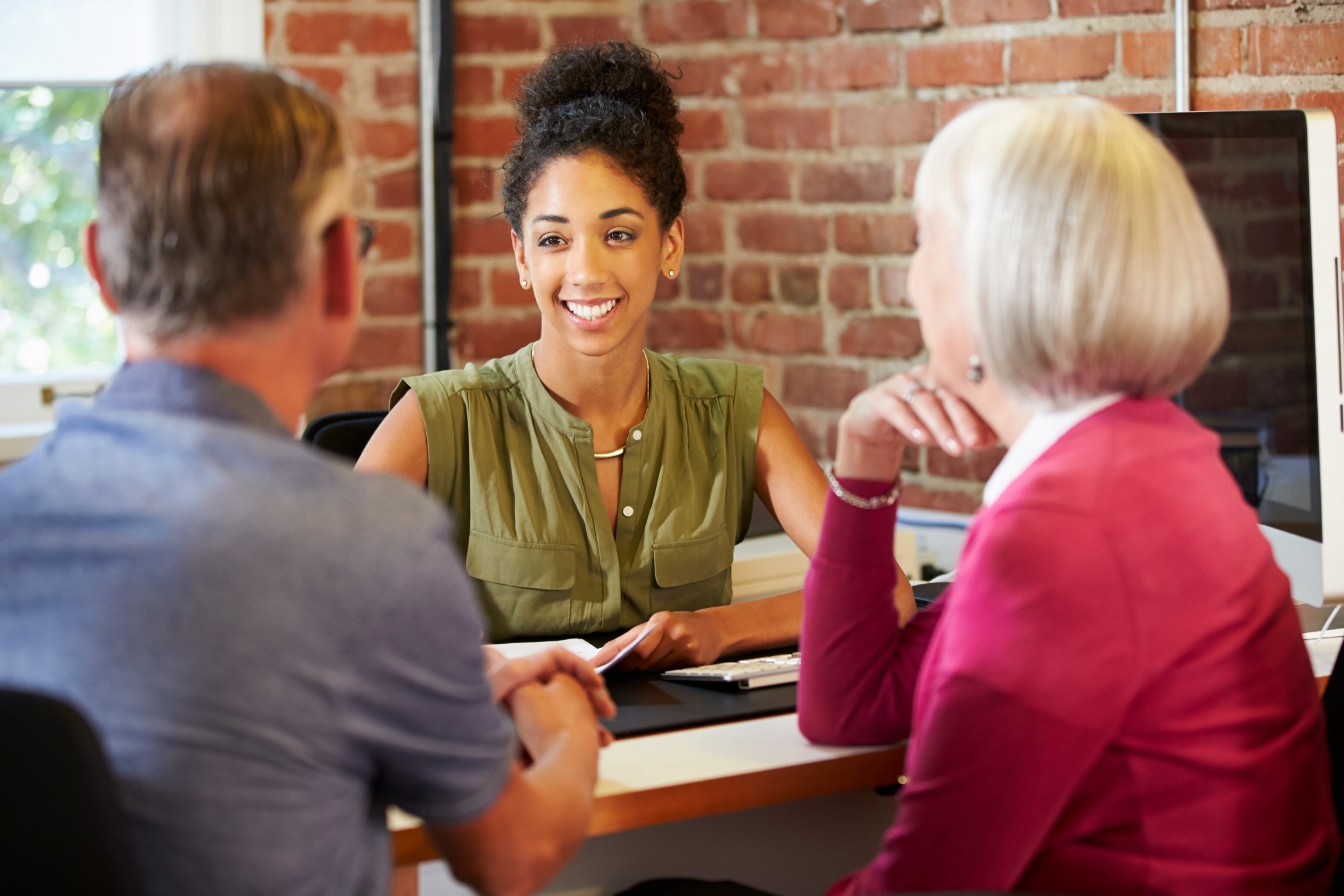 Planned gifts can be notoriously difficult to predict. Bequests in a will make up nine out of ten planned gifts. And less than 25% of those donors notify the organizations about their gift. In many cases, nonprofits only learn about a gift when it arrives as a check after a donor passes away.

This creates a couple of problems for planned giving teams. First, your nonprofit can’t thank or steward these donors while they’re alive. And second, you’re unable to speak to these donors, which prevents you from learning more about them. This makes it harder to identify new planned giving prospects among your current supporters.

However, by actively tracking planned giving donors and doing a bit of prospect research, you can create donor profiles and find new planned giving prospects. Here are four steps your nonprofit can take to get started:

The first step to figuring out who is most likely to make a bequest is to learn who has already decided to include your organization in their will. Send your supporter a survey to ask about their relationship with your organization, as well as their interest in legacy giving.

The questions you include should assess their capacity, propensity, and motivation to give. There are common characteristics that planned giving prospects share. We will go over these in more detail in the following steps. However, you should frame capacity questions around demographics, wealth markers, and future gift considerations. Propensity questions should focus on donor loyalty. Motivation questions should focus on their emotional connection to your organization. 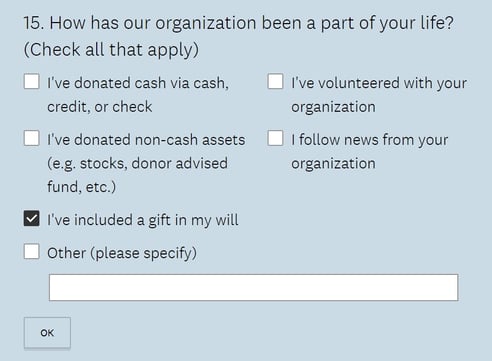 Include a clear explanation of why this information is important when you send a survey. Primarily, it will help your organization plan for the future. It will support your mission for years to come by attracting new planned giving donors.

Once you’ve gathered your survey data, analyze it. Look for people who have already left bequests as well as any indicators (such as age or donor loyalty) that will help you identify new planned giving prospects.

Prospect research digs deeper into the data on your donors. It can include personal backgrounds, demographics, giving history, wealth, philanthropic tendencies, and motivations. If you know who your current planned giving donors are, you can research them to identify which of these factors contribute the most to their propensity, capacity, and motivation to give.

Plan on conducting prospect research on your known planned giving donors as well as any top planned giving prospects or major donors in your contact list. You should try to uncover more information on these areas:

Philanthropic indicators, such as consistent years of giving, are one of the greatest determinants of whether a planned giving prospect will make a bequest.

Start by researching your annual, monthly, and major donors. The higher the frequency of their gifts or the longer they've been donating, the higher the indication of donor loyalty. In a Giving USA study, more than 50% of planned gift donors reported they had given to those organizations for more than 20 years.

Even if gift amounts are low, these donors have shown that they care about your organization’s mission. While they may not have the capacity to make a large gift today, they may still want to ensure the future of your organization. And there’s no better way to do that than to make a planned gift.

Not everyone has the capacity to make frequent donations. But that doesn’t mean that they don’t care about your organization. That’s why it’s also helpful to look at the people who are heavily involved. These could include volunteers, board members, faculty members, alumni, patients, or employees. These are the people who are benefiting from or running your organization in the present. And they’re most likely invested in seeing it thrive in the future as well.

Making donations to other nonprofits or political campaigns shows a donor’s interest in philanthropy. DonorSearch found that individuals who have given more than $2,500 to political campaigns are 14 times more likely to make a charitable donation in the future.

By looking at which of your planned giving prospects have given to other charities or political campaigns, you can identify those who are the most likely to give again. You can look up previous giving in a few publicly accessible databases. DonorSearch has a free service that allows you to look up donors by name to see their giving records. You can also access records on FEC.gov.

Planned giving donors don’t have to be wealthy to leave a bequest. However, they are statistically more likely to own homes with mid-level values. You may want to use this knowledge to identify your planned giving prospects who own real estate. To do this, you can look for public property tax records to determine ownership. Then search for a prospect’s address on Zillow to learn about the property’s value.

Stock ownership and business affiliations can also be good wealth indicators. Though, they won’t necessarily tell you much about a donor’s propensity to give. 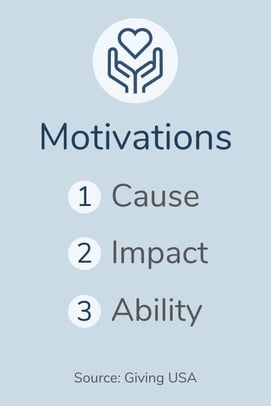 Motivational factors are the reasons why a donor feels inspired to support your organization. They’re generally based on an emotional connection to your mission.

In Giving USA’s study, they found that the top three motivations for donors to make a planned gift were the importance of the cause to the donor, the donor’s belief in the nonprofit’s ability to make an impact, and the donor’s ability to give a larger gift in their will than they could during their lifetime.

Step 3: Create a donor profile for each type of planned gift.

Now you can use your data on current planned giving donors and prospect research to model donor profiles. A donor profile is a description of the type of person that is most likely to make a donation to your organization.

You should create a donor profile for each of the four major types of planned gifts. This will help your organization decide which gift types to spend the most resources on promoting to your planned giving prospects.

Bequests gifts name nonprofits as beneficiaries of part of an estate in a will. They don’t affect a donor’s everyday cash flow, so bequest giving is accessible to everyone who makes a will. That leaves a wide range of potential donors — both among your top planned giving prospects and general supporters. However, in our 2019 planned giving report, we found that these donors do tend to have a few things in common. When modeling a donor profile for bequests, you may want to include these demographic characteristics:

It’s important to note that people who don’t have any or all of these characteristics do still make bequests. It may just be in lower numbers. For that reason, you should still send information about bequest gifts to every supporter. You never know who might be interested now or in the future.

Charitable gift annuities allow donors to make a gift of cash or securities in exchange for a fixed income payment for life. These planned gifts are irrevocable and usually large. So these types of donors tend to have higher incomes and be at the age where they have already retired. Gift annuities will appeal more to donors who are fiscally conservative, as these types of gifts ensure they will still have an income.

When modeling this donor profile, consider more wealth markers than you would with bequests. These donors are more likely to be mid or high level in their careers, have conservative stocks and other investments, and have a history of giving. They may not consider themselves wealthy, but they will be well-off or comfortable.

In a charitable remainder trust (annuity or unitrust), donors make a gift of cash or other assets and receive a fixed income for life. The remainder of the assets goes to the nonprofit.

These gifts are usually much bigger than charitable gift annuities. They often require assets of a million or more. Because of this, remainder trust planned giving prospects will be similar to your major donors. Model their donor profiles off of past and current major donors. Include wealth indicators, such as high-value homes, high household incomes, and professional careers.

Like with charitable remainder trusts, you may want to model these donor profiles off of your major donors. Lead trusts protect your donors’ assets and lower estate taxes. Therefore, these donors may be more likely to be parents with significant estates that they want to pass onto their children.

Once creating your donor profiles, segment your planned giving prospects to match. Identify which segments will have the highest value return. Try to set up one-on-one meetings with those supporters to go over giving options.

For the rest of your planned giving prospects, plan digital and physical outreach that clearly explains the benefits of planned giving. Offer easy ways for them to make a planned gift. For example, you could include a link to FreeWill, where donors can make a will and leave a bequest for free.

Continue to reach out to your planned giving prospects and supporters over time and update your prospect lists. Send them regular surveys to uncover new gifts as well as to collect data to refine your donor profiles.

Ready to uncover your planned giving prospects and donors? FreeWill can help.

8 types of planned gifts your nonprofit should know

From simple gifts like bequests to charitable lead trusts, there are many different types of planned gifts that nonprofit professionals should know.