Home
For individuals For nonprofits For lawyers About us
Log in
RESOURCES  |  June 2, 2020

Planned giving programs are how organizations make an investment in their future. Large organizations often have the resources to invest in robust programs with dedicated teams of gift officers. But even smaller organizations can get started with planned giving if they’re willing to devote a few hours to it each week. Large or small, here’s how your organization can jump-start your program:

First of all, planned gifts secure the future of an organization. They allow nonprofits to plan ahead and budget for years to come. However, nonprofits don't immediately receive the money from most planned gifts. That's why they're often considered "future gifts."

Bequests, which are gifts left in a will, make up nine out of ten planned gifts. And they're only given to the nonprofit upon the donor passing away. Bequests are the easiest way for donors to make a planned gift. So that's where your organization should focus first. All a donor has to do to make this type of planned gift is include a couple of lines in their legal will naming your nonprofit as a beneficiary of part of their estate. Planned giving programs exist to track these gifts and steward these donors. This ensures the organization stays in the donors' wills.

Second, you may need to make the case to your nonprofit’s leadership on the impact of planned giving. The Baby Boomer generation will pass on an estimated $68 trillion in the next 25 years. This is creating an unprecedented opportunity for nonprofits to tap into planned gifts.

Beyond the opportunity in sheer dollar amounts, there are many other benefits of planned giving as well. For nonprofits, planned gifts offer the highest return on investment of all fundraising types, are accessible to everyone, and also tend to increase annual giving. For donors, planned gifts allow them to leave a legacy and support the causes they care about without feeling the financial impact in their lifetime.

2. Allocate responsibility, time, and resources to your planned giving program.

Once you've decided to start a planned giving program, you need to choose who will be responsible for it. Even if your organization can’t hire a dedicated gift officer and wants to get several people involved, someone should take point. This will streamline communication and ensure that everyone stays on the same page. Your organization should also decide where planned giving fits within its existing infrastructure. It may be with the annual, major gifts, or another fundraising team.

Wherever responsibility sits, it’s important to align the development and communications teams. Everyone should understand the importance of planned giving, as well as how your organization will kick off the program. Doing this will help you allocate the right amount of time and resources to it. Development and communications should decide together on how often they want to market planned giving, how they want to frame it to supporters, and who will create materials.

For example, the planned giving program lead may be in charge of creating email copy to market the program. And communications may want to point out key moments for soliciting these gifts.

To start or grow a planned giving program, you need to know who to market it to. If you’re just starting out, you may want to send communications to your entire list of supporters. For example, many of our partners include making a gift in a will as one of several ways to give. They may also include it as a postscript in a regular fundraising email.

Your first prospects will be your board members, employees, and volunteers. These are the people who have shown dedication to your organization.

However, you can also use research and donor profiles to identify your top planned giving prospects among your supporters:

As your program gets more sophisticated or collects more data, you should be able to segment your prospects even further. Testing and tailoring your messaging to each group can help your nonprofit receive more of these gifts.

Use the SMART method to set attainable goals for what you want to achieve with your planned giving program, and decide what success looks like for it. It can take a while to get a donor to commit to a planned gift, especially if you’re meeting with top prospects. Therefore, you may want to set both qualitative and quantitative goals, such as:

Focus your goals on actionable items. Base them off of your number of prospects, as well as the time and resources you have to dedicate to your program. Create an annual plan for your goals, and then break it down into quarterly and monthly chunks. This will make it easier to track your progress and report on the results.

Nonprofit teams often use 'planned giving' as an internal term. Outwardly, many organizations call these programs legacy societies. A legacy society member is usually anyone who makes a planned gift. Legacy societies allow nonprofits to welcome donors and make them feel like a part of their community.

The first step to starting your legacy society is to choose a name. Many organizations just call it “[Organization Name] Legacy Society.” Others may choose a historical figure, an inspiring phrase, or their founding date. For example, the American Foundation for Suicide Prevention calls it their “Legacy of Hope Society.”

Then decide what you want to offer to your legacy society members. It could be as simple as recognizing your legacy donors in an annual report or brochure. You could also make your society more dynamic by offering perks. These often include invitations to donor events or complimentary newsletter subscriptions.

Once you finalize the details for your planned giving program, you can outline your marketing plan. This will most likely be a cross-team effort with communications or marketing.

Write up a page that explains all of the benefits of planned gifts to your donors. Include any tax advantages or legacy society benefits. Then use this one-pager to inform your other materials, such as website, email, and social media copy. You may want to create a press release on the foundation of your legacy society as well.

Step 2: Add planned giving as a donation option on your website.

If you want to encourage planned gifts, make it easy and intuitive for your supporters to give. You may want to create a clear landing page that provides resources for making planned gifts. Or add a section to your regular donation page that lets supporters request more information on planned gifts.

Your goal should be to make planned gifts accessible to everyone. Habitat for Humanity does this by creating a whole site for planned giving. The organization links to it from their main site, and then includes pages like “Gifts that cost you nothing now.” They offer sample will language, how to get in touch with their planned giving team, free resources, and a giving toolkit. 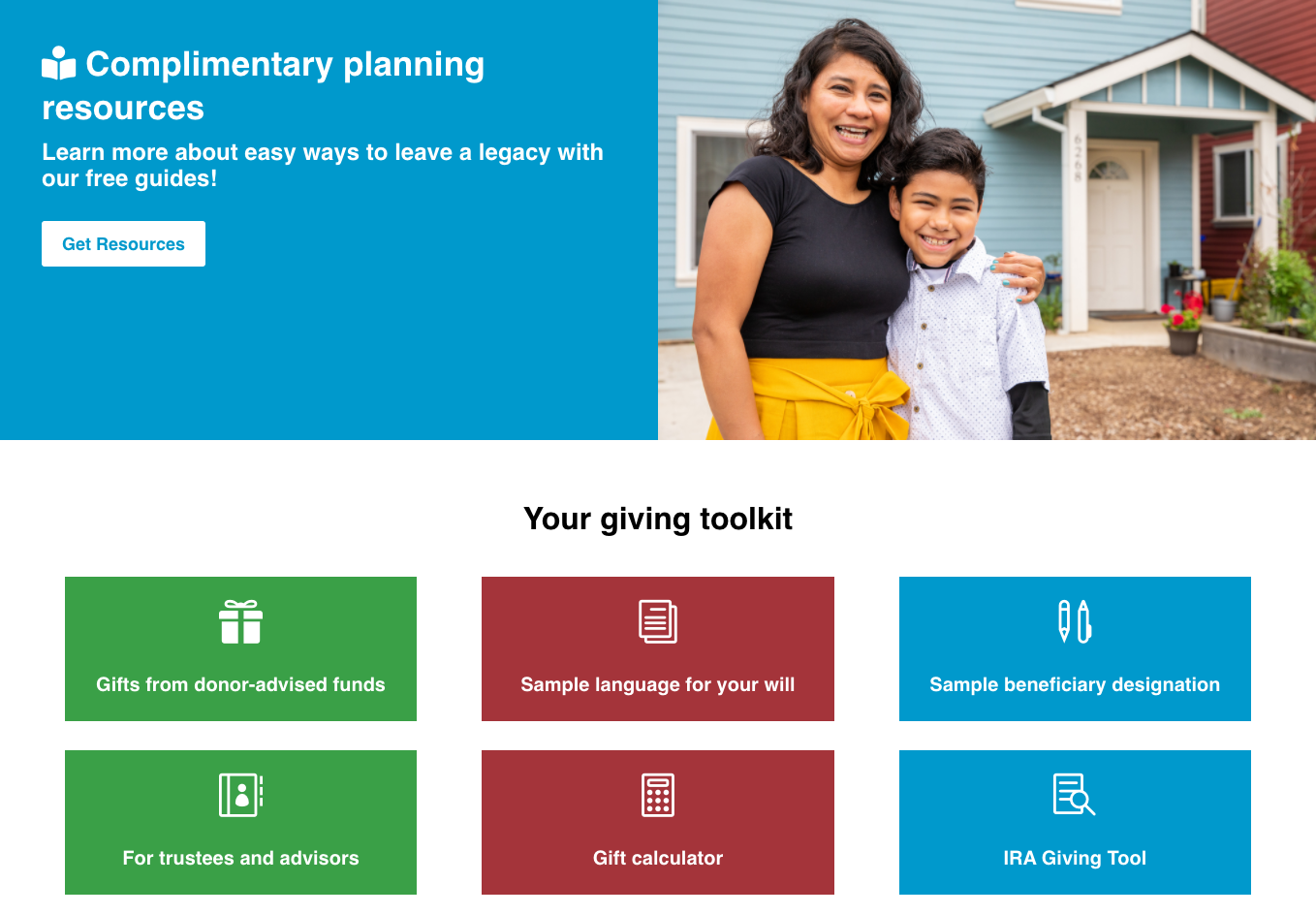 You can also provide your supporters with easy ways to make their wills online. For example, we partner with organizations to include FreeWill as a resource for this.  When doing this, you can use social proof statements to encourage supporters to leave bequests, i.e. “Many of our supporters have already written a will and included a gift to our organization.”

Include planned giving in communications as:

After launching your first planned giving campaign, plan consistent outreach. Repetition is integral for seeing results from your planned giving marketing. A supporter may open an email about planned giving several times before actually sitting down to make a will and leave a bequest. So track your engagement, follow up with potential donors, and set up meetings with top prospects or others that responded with interest.

A key part of your planned giving program should be to thank your donors as soon as they notify you of a planned gift. This could be part of welcoming them to your legacy society, a simple thank-you, or even a request to follow up with them by phone. Whatever you send, it’s important to acknowledge your donors’ generosity and keep them engaged.

After thanking your planned giving donors, begin stewarding them on a regular basis.

Events: Invite your donors to legacy society events, such as annual meetings, galas, or luncheons. Use these events to publicly acknowledge your donors. Focus on gratitude instead of donation asks. (If you’re canceling in-person events during the Coronavirus pandemic, here’s how you can take your events online.)

Depending on your organization type, you could offer tours of your facility. For example, a museum could offer private tours (or virtual tours) of its galleries. A food bank might offer a tour of their warehouse and operations. An orchestra could invite legacy society members to private concerts. And any organization could hold lecture series on topics related to their cause.

Donor stories: Ask your donors if you can share their stories.

They each had unique motivations for giving and hopes for the impact of their gifts. Sharing personal stories will help you engage with these donors, and encourage others to give as well. In these stories, try to have the donor reflect on what inspired them to give. For a college, an alumnus might speak about the impact that a financial aid program had on their life. This may have inspired them to pay it forward. Or a donor might have been inspired to give a gift in honor of a family member connected to a cause.

Significant dates: Depending on the type of planned gift your donor made, you may want to send them communications on the anniversary of their commitment. You can also send handwritten thank-yous and letters on their birthday or major holidays.

Volunteer opportunities: If donors have expressed interest in getting more involved with your organization, invite them to volunteer. This could range from asking your donors to be guest lecturers to helping out at a 5K race fundraiser.

Phone and video calls: Invite your top planned giving donors to annual calls with your organization’s president. Your gift officers may also want to check-in on these donors every once in a while to see how they’re doing. This outreach will be especially appreciated during the Coronavirus pandemic.

Care packages: Recently, our Co-CEO had a conversation with planned giving expert, Cathy Sheffield. Cathy mentioned that she sends handwritten notes with stress-reducing teabags to her clients. Sending a package like this can show how much your organization cares about your donors. Whether you send a care package during a difficult time like Coronavirus, or as a nice thank-you around the holidays, it will make your donors feel appreciated.

By actively tracking donors and doing a bit of research, your nonprofit can create donor profiles and find new planned giving prospects.

The benefits of planned giving for nonprofits and donors